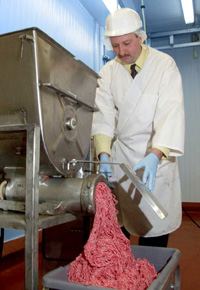 The center of a package of ground beef, for example, is often grayish brown because there is not enough oxygen to stabilize the pigment as red oxymyoglobin, but there was enough oxygen and exposure to light when the product was being ground and mixed to allow the brown pigment metmyoglobin to form.

A fresh roast, in contrast, would be purplish in the center. The shelf life of processed meat is reduced proportionately to the amount of exposure to air: the longer the product is mixed, and the smaller the meat is ground, the shorter the product’s shelf life.

Herbs and spices contain chlorophyll which naturally absorbs light, so when these ingredients are added to processed raw meats or used in marinades, the discoloration process is accelerated. The absorbed light is retained as heat which encourages bacterial growth and spoilage, and as the oxygen concentrations become lower, brown coloring becomes predominant.