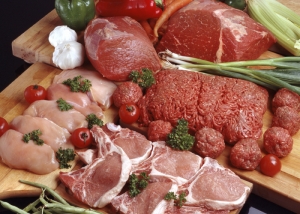 When considering Promolux lighting, we always recommend beginning with service and self-serve meat cases because the investment in product in these types of cases is very high. Furthermore, as it is perishable, any discoloration, dehydration, or degradation of the product is noticeable immediately.

Promolux lighting showcases fresh meat in the best possible light, attracting customers to your displays, while at the same time minimizing the damage caused by regular lighting y temperature changes. 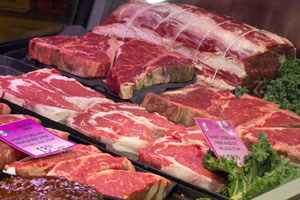 The popularity of organic foods has even transcended into the meat showcases of butchers and gourmet meat shops and delicatessens.

Organic meats are now prominently on display and with fewer preservatives, they are even more sensitive to the effects of case lighting.

Gourmet food retail shoppers are more likely than ever to select meat based on its color and freshness. In fact, many studies have shown that color is the primary means by which consumers judge meat juiciness, tenderness and flavor. 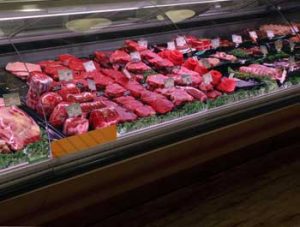 Farm fresh butcher shops and local grocery stores can extend the shelf life of their meat products and add to the sales value and profitability of the case by using a food light like Promolux which is specifically engineered for fresh food retail displays. Promolux fluorescent lights and LEDs designed for meat lighting, protect the bloom, the natural juices and flavor of assorted meat products, and processed and cured meats, ensuring shoppers are more satisfied with their purchase.

Paler cuts of pork are thought to be tough and dry when cooked. Neither extreme of pale or dark is ideal and both are considered problems in the pork industry caused by genetics and the handling of the pig before and after slaughter.

Both PSE pork (pale, soft, and exudative or oozing) and DFD pork (dark, firm, and dry) can be affected by the amount of water in and on the pork cut. This water escapes from meat with a low pH (< 5.4) and can scatter light, making the pork appear to be lighter than it really is. In addition, oxygen permeable polyvinyl wrapping causes DFD pork to appear darker than if it is in vacuum packaging, and less appealing than medium pink pork cuts. Consumers tended to avoid pale and wet pork, preferring cuts that were medium or dark pink and then within that category preferring the dryer cuts. 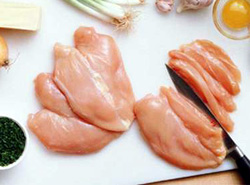 However, different light sources affect the perceived color of the poultry because they have different spectral components, so the same chicken part can appears to be several different colors. For example, a panel described a chicken leg as pink or red when it was under an incandescent light, brown when under a fluorescent light, and brown to purple under a metal halide light.

Since many studies have found that color is one of the fundamental factors consumers consider when purchasing chicken and turkey, it is vital that the poultry be displayed in lighting that does not hide its fresh appearance. 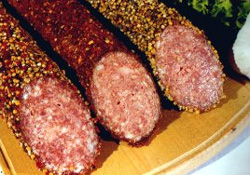 This pigment is not very stable, however. If the cured meat is exposed to display light and oxygen, the pigment becomes oxidized and breaks down, forming metmyoglobin nitrite and turning the cured meat gray. Heat can also contribute to nitrite burn, a series of three chemical reactions in which metmyoglobin nitrite reacts with excess nitrous acid to form nitrimetmyoglobin, which reduces to nitrimyoglobin (MbN), which in turn becomes the green pigment nitrihemin when exposed to heat. The green/gray color of cured meats can also be triggered when the meat is contaminated by metals from moulds or smoke sticks. 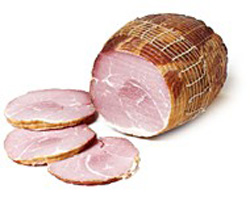 Impulse buying accounts for over a third of all meat purchases from self service meat cases according to one study, and this in turn is related to the visual appeal of the meat. Several studies have found that the most appealing cuts of meat are those that are the leanest, and then those that are the brightest in color, which customers interpret as an indicator of freshness.

One study found that over 40% of interviewees judged the freshness of meat by its color. Various surveys have shown that consumers in Colorado considered the color of the muscle and fat to be the most important indictor of quality, while in Missouri consumers interpreted the color of the lean tissue as an indicator of freshness or age. If the meat does not appear to be fresh, customers will not buy it.

When it comes to fresh meat merchandising and protection there is simply no other lamp that can compare to Promolux.