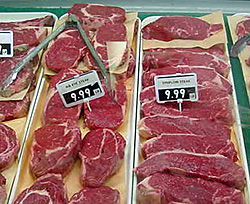 Meat color is a reflection of the wavelengths of light that are not absorbed by the meat, and is therefore a relative phenomenon determined by the spectrum emitted by the light source.

Supermarket fluorescent and LED lighting emits high levels of green and yellow wavelengths and very little of the red and blue wavelengths, which causes red lean tissue to appear brown, and white fat to look yellow or greenish.

Consumers judge the freshness of meat by its color, but many lighting sources distort true colors.

Incandescent lights are very strong in the yellow wavelengths and weaker in blue and green wavelengths, and we tend to think, erroneously, that these lamps reveal true colors.

If meat displays do not look appealing even when the meat is blooming, consumers will not be tempted to buy, and the meat will spoil before it can be sold.