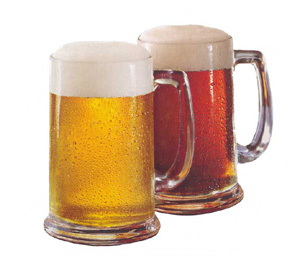 Ultraviolet and harmful visible spectrum radiation from regular fluorescent and LED retail display case lighting initiates a photochemical reaction in beer that produces mercaptans, a group of organic compounds that includes the chemical skunks spray on their enemies.

Beer that has been light struck tastes and smells like a chemical that is produced by a skunk, this is why it is often referred to as “skunky”. The light sensitive compounds found in hops (called isohumulones) degrade under light and produce the offensive skunky smell and taste. It is particularly stronger in lighter beers or beers that use more hops.

Refrigerated beer display cases are often brightly lit, which affects the taste of bottled beer. Because light cannot penetrate beer cans, canned beer is not likely to be light struck.