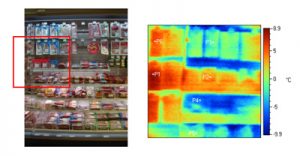 Radiation from deli display lighting raises the surface temperature of lunch meat even when the meat is covered with transparent wrapping and displayed in refrigerated delicatessen cases equipped with humidifiers. 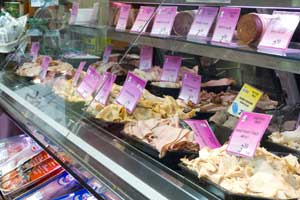 When roasted deli meat such as roast beef or turkey and processed deli lunch meats such as bologna are sliced on demand at deli service counters, the first slice is often thrown away because the outside layer of the deli meat is dry. This soon becomes costly for the deli.

Bulk foods within service counters are not well protected from the light, but they are monitored regularly by deli staff. Pre-sliced luncheon meat at service counters are very vulnerable to dehydration and discoloration, particularly presliced ham and other cured and processed meats, and the slices need to be shuffled to keep them from drying out and fading.

We have installed Promolux lamps in our Produce, Meat and Deli departments. It really brings out the natural colors that other lamps seem to wash away. They make everything look great. 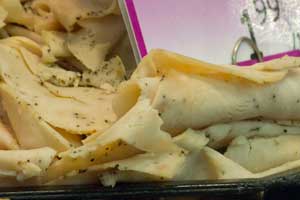 Heat and UV radiation from delicatessen display case lighting can cause deli lunch meats to spoil. Processed and cured lunch meats containing herbs such as oregano and roasted deli meats that are coated with pepper or other spices are particularly vulnerable to spoilage because herbs and spices are photosensitive. Chlorophyll absorbs radiated light, accelerating the decomposition of the herbs and spices and increasing bacterial growth on nearby meat surfaces. 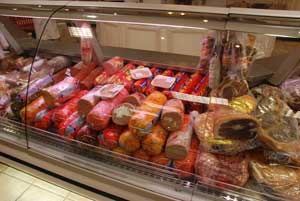 Compared to other fluorescent lighting, Promolux lamps and LED lighting emit 86% lower UV B radiation and 52% lower UV A radiation so deli meat has a longer shelf life and fresh color and appearance.

Promolux lamps are more than just a food lamp, they are designed to complement a stores’ merchandising program through the safe illumination of the case without sacrificing color presentation.