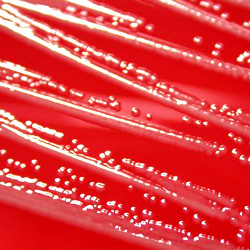 The Canadian Meat Packers Council recommends that internal meat temperatures should not exceed 39°F or 4°C, and other studies have suggested that the optimal storage temperature for meat is just below the freezing point.

Psychrotrophic bacteria are capable of multiplying in refrigerated atmospheres between 26°F to 41°F (-3°C to 5°C) and grow at optimal rates at 68°F to 86°F (20°C to 30°C), but their growth can be restrained by keeping meat at 29°F or -1°C, which is also cold enough to prevent the growth of food-borne pathogens. The density of the meat prevents it from freezing at these temperatures, and though bacteria can grow at -3°C or colder, they grow much more slowly at cold temperatures.

Temperature has an even more profound effect on the spoilage rate of meat. Beef at 5°C spoiled three times faster, and beef at 10°C spoiled five times faster, than beef stored at 0°C. High meat surface temperatures not only encourage psychrotrophic bacteria to grow exponentially, accelerating the rate of discoloration and spoilage, but also provide ideal conditions for the growth of food borne pathogens such as Salmonella. 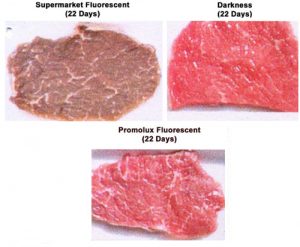 However, keeping meat displays at these ideal temperatures is challenging for retail meat stores. The actual surface temperature of displayed fresh meat is often much higher (4 to 25°C higher) than the temperature recorded at the display case thermometer, partly due to UV radiation from display case lighting, which penetrates meat packaging and heats the surface of the meat just as the sun can cause a sunburn on a cold winter day.

Shelf life can be lengthened by controlling the temperature of the meat and by improving sanitation as the meat is being processed. While moving the meat to coolers overnight where they can be stored at 1°C will extend the shelf life of the meat to 5 days, this may not be worth the added labor costs and loss of refrigeration cooler space.